Followers of my Instagram feed know that I’ve been thinking a lot about the Buddhist teachings of Pema Chödrön. I’ve particularly latched onto this quote of hers from the book When Things Fall Apart:

As long as we’re addicted to hope, we feel that we can tone our experience down or liven it up or change it somehow, and we continue to suffer a lot. In a nontheistic state of mind, abandoning hope is an affirmation, the beginning of the beginning. You could even put “Abandon Hope” on your refrigerator door instead of more conventional aspirations like “Everyday in everyway, I’m getting better and better.” We hold onto hope and it robs us of the present moment.

One might wonder why I’ve been trying to digest this concept on Instagram. How can a profound Buddhist concept be understood through a media platform built on our desperate hope to be ‘liked.’  I’ve always been wary of people who try to pair spiritual practice with photography. This is what I said in an interview from 2010:

I think photography is the most anti-Zen activity. It’s all about stopping time, possessing things, holding onto them. And you know, if my goal was to be a healthy person, photography would not be the thing. I have this joke about becoming a binoculographer: you go around and look at the world without photographing. That would be a spiritually healthy way of taking things in. But this wanting to possess it is not so healthy.

For this reason, I’ve never given the least bit of attention to Minor White. Until recently I didn’t even know he was born in Minneapolis and attended the University of Minnesota. While I acknowledged White’s historical importance as both a teacher and as a co-founder of Aperture, I wrote off his photographic work as dream-catcher schlock.

I don’t own a single Minor White book. But earlier this week, a friend lent me White’s opus, Mirrors Messages Manifestations. My sincere hope was to see White’s photographs with fresh eyes and perhaps find an opening for pairing photography and spirituality. But after going through the book a dozen times, I couldn’t talk myself into the pictures. While I can understand some of the dated elements like infrared, even the straightest pictures felt over-idealized.

In trying to figure out what bothered me about White’s pictures, I turned to Robert Adams. Despite cherishing his book Beauty in Photography, I’d always skipped his essay on White. As always, Adams comments are insightful:

At his best, White made pictures because of that authenticity, the appearance of the world. When he failed, it was because he tried to escape it, to travel to what e.e. cummings sardonically called a “hell of a good universe next door.” Because we have all wanted to make that trip, in sheer weariness with home, we can sympathize, but because there is no hope [emphasis mine] of reaching such a destination short of death, we are obliged to resist it.

The problem I have with White’s photographs is that they are dripping in mystical hope. It appears that this was his ambition for the medium from the beginning. Here’s a passage from Mirrors Messages Manifestations:

During April of 1937 before moving to Oregon from Minneapolis to take up photography, I wrote, as William Blake used to, “A Memorable Fancy”: “Changing from verse to photography will only be a change of media, not the core. I have known the taste of poetry while writing, the taste will be the same in photography. If a few years pass without the ecstasy of poetry while I learn the camera, what matter – If some day the taste of Poetry is a Photograph. Contemplation of Deity in all manifestations is the true work of the soul.

But it isn’t long before White sees failure on the horizon. This diary entry is from 1947:

It is hardly surprising that I have concluded, after five years research, that camera is both a way of life and not enough to live by…psychologically speaking. Glass between me and the world is both a channel and a barrier. To live through the lens, to live out my inner conflicts and brambles through the camera, to turn to the camera to help me return to the world was an experiment I set out to explore five years ago. I knew it was headed for failure in some way, but I persevered because little else was left open.

What bothers me about White’s photographs is that they are an evasion of these inner conflicts. His pictures are like dream sequences in a movie – they only work if they are surrounded by the grit of reality. In a fantastic essay on White entitled ‘Cruising and Transcendence,’ Kevin Moore shows some of this grit. In 1939, shortly after taking up photography, White made a picture that I think is better than any of the 226 photographs in Mirrors Messages Manifestations: 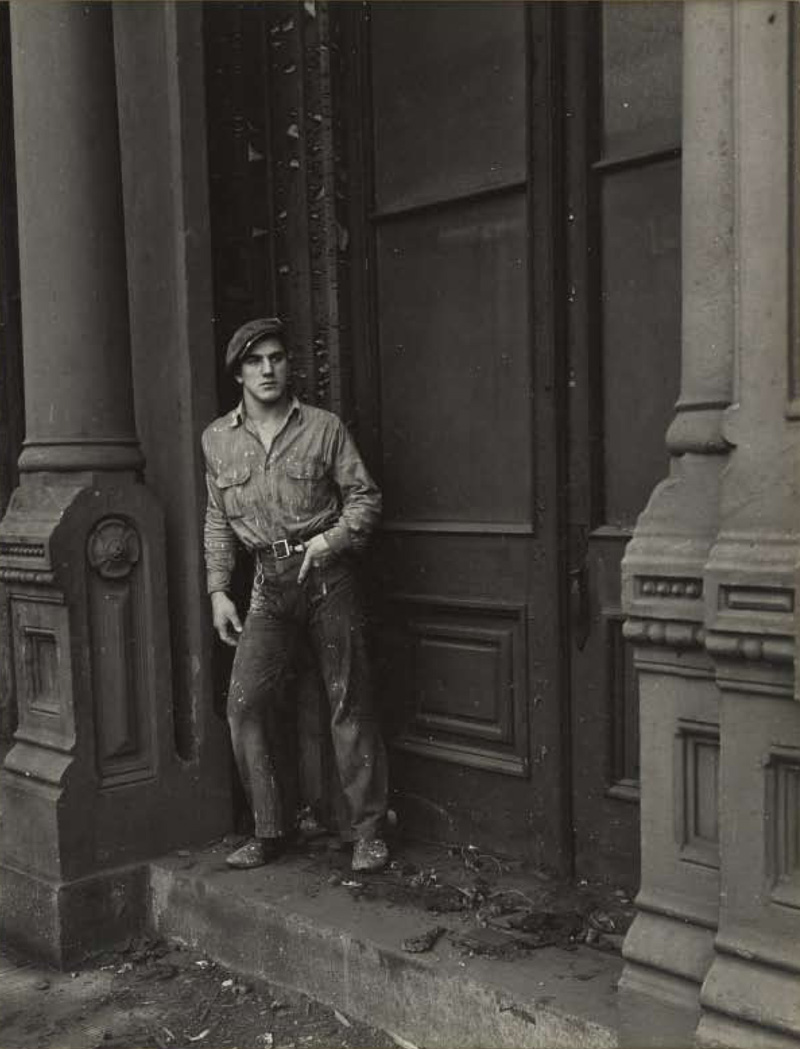 Why does this picture work for me so much better than White’s mystical landscapes? I think it is because his longing is so rooted in the present moment. White isn’t dreaming for a better world, he’s looking at a hot guy in a garbage-strewn doorway with, as Moore describes it,  “his index finger exposed and pointing downward toward a prominent bulge.”

So where does this leave my Instagram investigation of spirituality? Should I just drive around like Garry Winogrand looking at cute ladies on the street with binoculars and make that my new religion?

Or should I give up photography?

Lately I’ve been practicing meditation. The process has been rocky, but now and then I glimpse the potential. After this morning’s visit to the meditation center, I came back to the studio and read this passage of Mirrors Messages Manifestations:

Finally only meditation seems to generate input worth tapping. Hypnosis, drugs, camera, all appear to be skeleton keys to the locked rooms of my house I have never entered. Skeleton keys that open dead rooms.

When I make key for these doors by being still with my Self, the room, opened, is full of flowers, furniture, friends.” – 1963

24 Replies to “Hope, Failure and Binoculars – Meditations on Minor White”