“I never think about photography…it doesn’t interest me.” Henri Catier-Bresson, 2003

“Maybe photography isn’t an art any more. Maybe it never was.” Robert Frank, 2008

Why did two of the most legendary photographers of the twentieth century give up on photography? I found myself asking this question often while viewing the beautiful new retrospective monograph, Sergio Larrain, published by Aperture.

Larrain was a recluse. After little more than a decade of professional practice, he gave up photography in the early 1970’s to live in the Chilean countryside and practice yoga. His primary form of creative expression during these years was letter writing. I recently spoke with Joseph Koudelka who reminisced about the barrage of letters Larrain would send him and his fellow Magnum photographers proselytizing his spiritual practice. Koudelka was clearly unaffected by these letters, but I wonder how Cartier-Bresson felt? Cartier-Bresson had great respect for Larrain. In fact, it was Cartier-Bresson who invited Larrain into Magnum in 1959. The Aperture book reproduces a couple of letters that Larrain wrote to Cartier-Bresson. This one was written in 1960, a year after Larrain became a full member of Magnum:

Thank you for your little note. I am always happy to hear from you. Here I am, mostly writing…doing [few] photographs.
I am puzzled…

I love photography as a visual art…as a painter loves painting, and [I] like to practice it in that way…work that sales [easy to sale] is an adaptation for me. It is like doing posters for a painter….at least I feel I lose my time.

Good photography is hard to do and takes much time for doing it. I [tried to adapt] myself since I entered your group in order to learn and get [published]…but I want to get serious again…there is the problem of markets…of getting published, of earning money…I am puzzled as I tell you and would like to find a way out of working in a level vital for me…I can’t adapt myself longer…so I write…So I think and meditate…waiting for a clear direction to grow in me…

Good bye, my love for you

Three years later, Larrain wrote Cartier-Bresson another letter in which he seems more confident in taking the uncommercial path:

I try to do only work that I really care for. It is the only way for keeping me alive photographically, and I take as much time as I [need]. I keep myself in a slow peace, with much time for myself and doing other things, and see how photography develops…if it continues to develop… I do what I want the way I want, I feel that the rushing of journalism – being ready to jump on any story, all the time – destroy my love and concentration for work.

Unfortunately the book does not reproduce any of Larrain’s letters to Cartier-Bresson or other photographers after he quit photography in the early 1970’s. But it does include a 1987 letter he wrote to the book’s editor, Agnès Sire, a former art director at Magnum and current director of Foundation Henri Cartier-Bresson. Here are some excerpts:

Good photography, or any other manifestation in man, comes from a state of grace. Grace comes when you are delivered from conventions, obligations, convenience, competition, and you are free, like a child in his first discovery of reality. You walk around in surprise, seeing reality as if [it is] for the first time….

That is why people that do creative work have to isolate themselves, they are all hermits, one way or another….

In Magnum we [saw that] with Bruce [Davidson] for example. When he just came, it was pure poetry his NY gang and what he did at that time. He got, from there, a contract with Vogue NY, as I remember, to do 4 stories a year, he got money, and the miracle has gone forever…sometimes it came back, but never [like] in the beginning…then how do you keep the light alive?

The art is to live in happiness, with love, with truth, with purity, not swallowed by mechanization…Henri did preserve that for many years.

I don’t know if Cartier-Bresson’s decision to give up photography was influenced by Sergio Larrain, but Larrain did seem to have an acute understanding of the way success corrupts artist vision. “The photographer’s tragedy is that once he achieves a certain level of quality or fame, he wants to continue and he gets completely lost,” said Larrain in a rare interview in 1976.

Another photographer equally distrustful of success is Robert Frank. In the introduction to Sergio Larrain, Agnès Sire writes about this connection:

Larrain has often been called the ‘Latin American Robert Frank’ and it is true that they shared the same desire to make room for an inner life, while continuing to integrate the heritage of classic documentary photography. Both of them also chose to turn away from photojournalism when they were quite young in order to move on to something else, and both believed that success (including and above all in the press) is dangerous for the poet.

What is peculiar about Larrain is that he had nowhere near the same level of success as Frank or Cartier-Bresson when he gave up photography. And while I very much like a number of the photographs in Sergio Larrain, I don’t think his work reached the same level of either of these masters. Nevertheless, Sergio Larrain was easily one of my favorite photo books of the year. But a large part of my admiration for the book is my fascination with Larrain’s decision to quit photography. In some ways, this desire is expressed in Larrain’s best pictures, such as the two pictures depicted on the front and rear of the book: 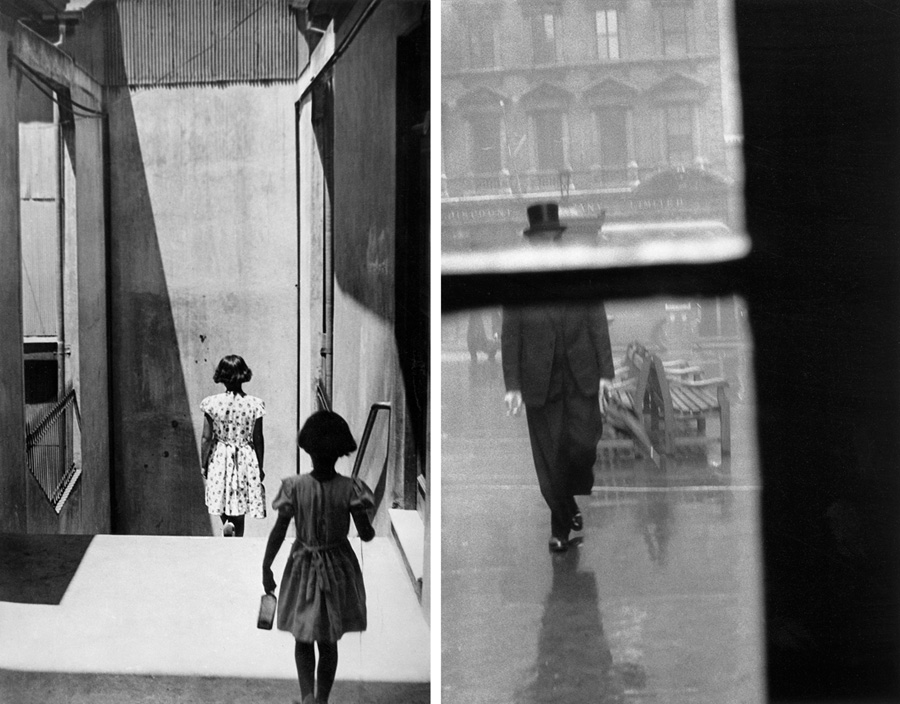 But ultimately the best expression of Larrain’s desire to retreat is his letter writing. Here is another passage from Larrain’s 1987 letter to Agnès Sire:

You see, in our work of hunters of miracles we have the happiness of the magic, but also the impossibility to control it…we have to be open to the muse, as they used to say … and keep eating, clothing, paying the rent…etc. I suppose it has always been like this, when the kayak hunters went to the sea, they never knew if they were going to find the whales or a storm…when we try to control things completely, boredom establish its reign; and we degrade…and at the same time, life has to keep going, always…that is why to make a good use of the hunt [we need] wisdom. To get oil for the lamps, leather for the shoes and clothing, [to] make harpoons with the bones, etc. To keep this miracle of life, in happiness, in tenderness, forming children, preserving elders, listening elders…

In the eternal moment which is reality Agnès, you have to give time to rest, to renew, as with the land, if you exhaust it, by permanently asking fruits, you disorganise the rhythm…the breathing…Silence, peace and loneliness are necessary to receive inspiration, [to] be empty for the new…for the reign to come, daily…adios.

With those words as inspiration, I think I’ll say adios to these weekly Popsicle posts. I’m wiped out after the recent Texas Triangle marathon (shooting, exhibition and publication in less than a month) and need a break from these weekly assignments. While it is frustrating to only complete 46 of the 52 posts, it isn’t like I’m quitting photography…yet.

24 Replies to “Popsicle #46: The letters of Sergio Larrain”