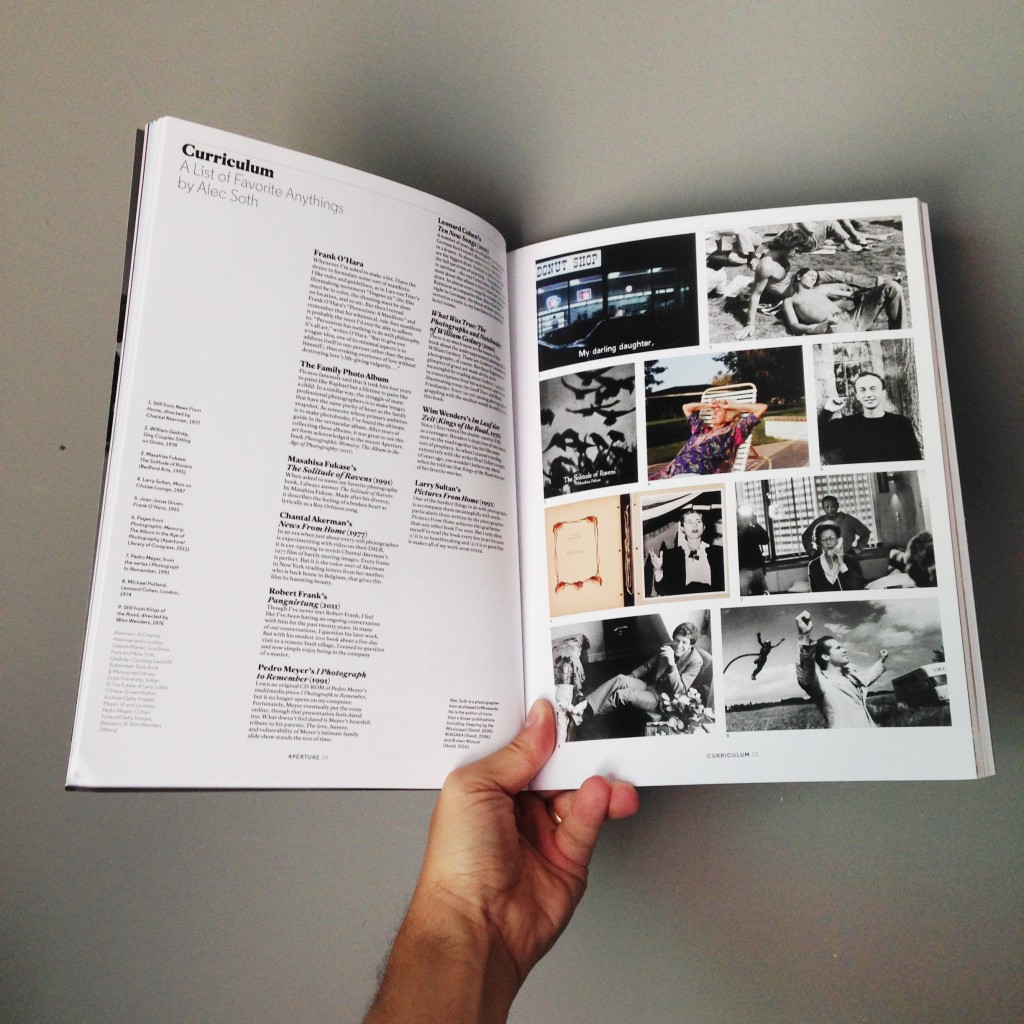 Curriculum: A List of Favorite Anythings by Alec Soth (in the current issue of Aperture Magazine)
⠀⠀⠀⠀⠀⠀⠀⠀⠀

(1) Personism Frank O’Hara
Whenever I’m asked to make a list, I have the desire to formulate some sort of manifesto. I like rules and guidelines like Dogma 95 (the film must be in color, the shooting must be done on location, etc). But then I re-read Frank O’Hara’s ‘Personism’ and remember that his whimsical, rule-free manifesto is probably the most I’d ever be able to adhere to. “Personism has nothing to do with philosophy, it’s all art,” writes O’Hara, “to give you a vague idea, one of its minimal aspects is to address itself to one person (other than the poet himself), thus evoking overtones of love without destroying love’s life-giving vulgarity.”
⠀⠀⠀⠀⠀⠀⠀⠀⠀

(2) The Photo Album
Picasso famously said that it took him four years to paint like Raphael, but a lifetime to paint like a child. In a similar way, the struggle of many professional photographers is to make images with the purity of heart of the family snapshot. As someone whose primary ambition is the making of photobooks, I’ve found the ultimate guide in the vernacular album. After years of collecting these albums, it was great to see this art form acknowledged in the recent Aperture book:  Photographic Memory: The Album in the Age of Photography.
⠀⠀⠀⠀⠀⠀⠀⠀⠀

(4) News From Home (Chantal Ackerman)
In an era when just about every still photographer is experimenting with video on their DSLR, it is eye opening to revisit Chantal Ackerman’s 1976 film of barely moving images. Every frame is perfect. But it is the voice-over letters that Ackerman reads to her mother back home in Belgium that give this film its haunting beauty.
⠀⠀⠀⠀⠀⠀⠀⠀⠀

(5) Pangnirtung by Robert Frank (Steidl) ⠀
Though I’ve never met Robert Frank, I feel like I’ve been having an ongoing conversation with him for the last twenty years. In many of our conversations I question his later work. But with his modest 2011 book about a five-day visit to a remote, Inuit village, I stop questioning and simply enjoyed being in the company of a master.
⠀⠀⠀⠀⠀⠀⠀⠀⠀

(6) I Photograph to Remember by Pedro Meyer
I own an original, 1991 CD-ROM of Pedro Meyer’s multi-media piece, I photograph to remember, but it no longer opens on my computer. Fortunately Meyer eventually put the essay online, though that presentation is dated too. What isn’t dated is the heart of Meyer’s tribute to his parents. The love, humor and vulnerability of Meyer’s intimate family slideshow has stood the test of time.
⠀⠀⠀⠀⠀⠀⠀⠀⠀

(7) Ten New Songs by Leonard Cohen
A number of years ago in a frigidly contemporary German hotel room I discovered Cohen’s CD in a drawer. As always with Cohen, the lyrics are the biggest draw. Nobody is able to speak to the full spectrum of yearning – from physical to spiritual – like Cohen. But what I love most about this album is that Cohen isn’t singing alone. In almost every song the vocalist Sharon Robinson accompanies him. Since that first night in Germany, the blend of their voices has served as a tonic to my loneliness in a hundred hotel rooms.
⠀⠀⠀⠀⠀⠀⠀⠀⠀

(8) What was True: The Photographs and Notebooks of William Gedney
There is so much meat on the bones of this 2000 book about the underappreciated photographer William Gedney. There are Gedney’s wonderful photographs, of course. But these fragmentary glimpses of grace are made all the more meaningful by reading about Gedney’s process in transcriptions from his notebooks and in two unusually illuminating essays by Geoff Dyer and Maria Friedlander. Every unsung photographer grappling with the medium would do well to own this book.
⠀⠀⠀⠀⠀⠀⠀⠀⠀

(9) Im Lauf der Zeit (Kings of the Road) by Wim Wenders
Since I first rented the double-cassette VHS as a teenager, Wender’s depiction of two lonely men on the road together has felt like some sort of prophecy. So when I started traveling extensively with the writer Brad Zellar a couple of years ago, you wouldn’t believe my shock when he told me that Kings of the Road was one of his favorite movies.
⠀⠀⠀⠀⠀⠀⠀⠀⠀

(10) Pictures from Home by Larry Sultan
One of the hardest things to do with photographs is accompany them meaningfully with words – particularly with the words of the photographer. Pictures From Home achieves this goal better than any other book I’ve seen. But I only allow myself to read the book every few years because (1) it is so heartbreaking (2) it is so good that it makes all of my work seem trivial.