During my commute home from work I usually listen to the sports talk radio station. The curious thing about this is that I’m not a sports fan – I just enjoy listening to people converse passionately about something besides politics. The other night while coming home late from work, the sports station aired a talk show devoted to video games. It was the best radio I’d heard in a long time. I had almost no idea what they were talking about (the last video game I played was Donkey Kong on my Atari), but I found their passion and insider knowledge inspiring.

I had a similar feeling while reading Yoshihiro Tatsumi’s 800+ page graphic novel, A Drifting Life. Whereas Tatsumi’s Good-Bye (reviewed last week) was terse and minimalistic, A Drifting Life is an extraordinarily detailed memoir of the first fifteen years of Tatsumi’s involvement in Manga.

Before reading A Drifting Life, I knew next to nothing about Manga – it was just that shelf in the bookstore that made me feel like a pervy old man when I got near it. But Manga, like video games, turns out to be a vast universe with a rich history.  As Tatsumi tells his story, he also tells the historical story of Manga.

One of the most fascinating things I learned is that Manga was developed out of something called ‘picture story shows.’ These were essentially puppet shows with pictures instead of puppets. At the height of their popularity in 1949, there were 50,000 picture storytellers on the streets of Japan. Tatsumi also points out that some of these stories were called “gageki” (picture drama).

When these picture story shows become transformed into published stories, the new commercial art form of Manga was born. At a very young age, Tatsumi became swept up in the success of this new craze. But it wasn’t long before he became hungry to push it in new directions. Much of the book deals with Tatsumi’s ambition to create an “anti-Manga Magna technique” called Gekiga (dramatic pictures). Essentially what Tatsumi was creating was an adult form of literature that is very similar to the graphic novel’s relationship to the comic book.

While reading A Drifting Life, I often found myself envying Tatsumi. It must have been incredibly exciting to not only be active in an art form in its infancy, but to also be one of the people pushing its parameters. In photographic terms, I think of a photographer born three years later than Tatsumi in Osaka, Daido Moriyama. But now, of course, it has been over forty years since Moriyama published Bye Bye Photography. One can only envy the chaotic energy of the time when Tatsumi and Moriyama were finding their way.

Who is inventing the graphic novel or Bye Bye Photography of today? When I talk to young photographers, I often say that the next Americans isn’t going to be a book, but something else. Maybe it will be a website or an app. After listening to that talk radio show, I’m thinking it might be a video game. In any case, I’ve already missed the boat. But that’s okay. After reading A Drifting Life, I’m thinking about trying to revive the ‘picture story show.’ 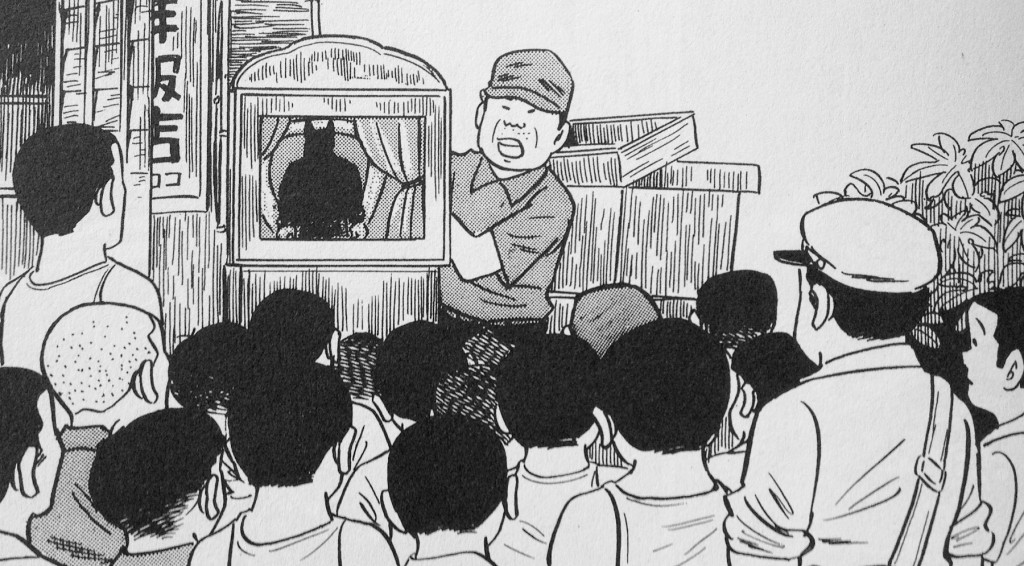 7 Replies to “Popsicle #29: A Drifting Life by Yoshihiro Tatsumi”