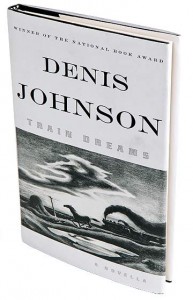 When I was in my twenties, Denis Johnson’s masterpiece, Jesus’ Son, was my favorite book. It’s like a homemade airplane skidding along the bruised tarmac of reality, occasionally rising a few feet in the air, then finally catching air and soaring into the dream world. It is pretty much the perfect book for a twenty-something dizzy with longing.

When I was thirty-one, Johnson came to Minneapolis. He was there to perform some sort of musical collaboration, but I’ve pretty much forgotten all of the details. All I remember was nervously waiting for the event to end so that I could hand Johnson a copy of my book dummy for Sleeping by the Mississippi. I’ve also blocked out the memories of that exchange. All I know is that Johnson took the book and later informed me (by letter? did I dream this?) that he couldn’t write the introduction.

Twelve years later, I still think Denis Johnson would have been the perfect person to write an introduction to Sleeping by the Mississippi. And now, after reading Train Dreams, I think he probably should have written the introduction to Broken Manual as well. Broken Manual is my mid-life crisis book. It is about realizing that youth is slipping away and the fantasy of escaping into nature. It is about coming to terms with being a broken man.

Here are some passages I highlighted from Train Dreams:

“He liked the grand size of things in the woods, the feeling of being lost and far away, and the sense he had that with so many trees as wardens, no danger could find him.”

“By most Januaries, when the snow had deepened, the valley seemed stopped with perpetual silence, but as a matter of fact it was often filled with the rumble of trains and the choirs of distant wolves and the nearer mad jibbering of coyotes. Also his own howling, as he’d taken it up as a kind of sport.”

“God needs the hermit in the woods as much as He needs the man in the pulpit. Did you ever think about that?”

“Grainer still went to services some rare times, when a trip to town coincided…He very often wept in church. Living up the Moyea with plenty of small chores to distract him, he forgot he was a sad man. When the hymns began, he remembered.”

“Beyond, he saw the Canadian Rockies still sunlit, snow-peaked, a hundred miles away, as if the earth were in the midst of its creation, the mountains taking their substance out of the clouds. He’d never seen so grand a prospect. The forests that filled his life so thickly populous and so tall that generally they blocked him from seeing how far away the world was, but right now it seemed clear there were mountains enough for everybody to get his own. The curse had left him, and the contagion of his lust had drifted off and settled into one of those distant valleys.”

On the back of old 35-mm film cameras, there is a slot where you can put a tab from the film box to remind yourself which type of film you are using. I recently encountered a camera in which the photographer had a put a picture of David Lynch in this slot. As I leave for a shooting trip to Colorado this week, I’m thinking I should put a picture of Denis Johnson on the back of my camera. Who knows, maybe he’ll write the introduction to my next book. A boy can dream.

One Reply to “Popsicle #16: Train Dreams by Denis Johnson”

Leave a Reply to b dorso Cancel reply