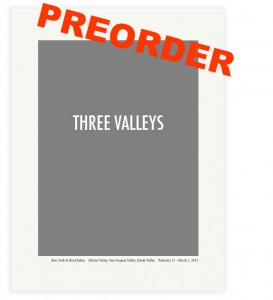 From February 12th through February 28th, Alec Soth and Brad Zellar will be in California, exploring the Valleys of Silicon, San Joaquin, and Death for the fourth edition of The LBM Dispatch. While each of these valleys has a distinct character, all of them loom large in the country’s history and mythology of success, failure, dreams, and futility. Continuing The Dispatch’s examination of community in the 21st-century United States, Three Valleys will examine the brave new worlds and pervasive virtuality of Silicon Valley, the Depression-era remnants of agricultural settlements and immigrant communities in the San Joaquin, and the other-worldly boom-and-bust landscapes of Death Valley, where the Manson Family holed up at the tail end of the 1960s.

Along the way Soth and Zellar will post a selection of pictures and stories on The LBM Dipatch Tumblr. You can support the project by pre-ordering your copy now: